Support Us
OUR STORY

An Unforgettable Journey of Love and Loss
Turning Tragedy into Giving Back, Giving Hope and Saving Lives 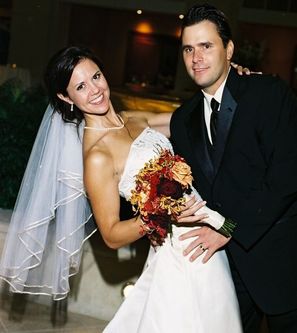 ​Stephanie and Martin Klaiber moved into Eagles Ridge in River Creek in August of 2006, just a couple months before they would become husband and wife on October 7th, 2006.  It was the start of an amazing chapter of both of their lives and one that was filled with so much love, and so many hopes and dreams as they purchased their very first home together.

They were married at Holy Trinity Church in Georgetown and were surrounded by friends and family as they took their wedding vows and committed to love and cherish each other for the rest of their lives.  That day was the start of an unforgettable journey of two people who loved each other, loved life, their families and friends and cherished every moment.

In December of 2006 as they headed to Maryland to visit with Stephanie’s family for their first Christmas eve as husband and wife, Martin took her on a detour – one that would bring a beautiful 5-month old Lab/Doberman mix, about 40 pounds and full of energy into their lives. Chelsea continued to be the most wonderful blessing and filled a void that they were not able to fill due to unknown reasons.  She was like the child they never had and was a part of the family from the moment they brought her home from the Tails of Hope foster family.

Fast forward to October 4th of 2013, the day that would change their life forever.  One that came like a Tsunami and wiped away every hope and dream in almost an instant.  On this day, just 3 days’ shy of their 7th anniversary, Martin was involved in a serious car accident while driving home on Route 15 in Leesburg, VA.  After the first and most critical 72 hours following his accident, it was determined that the injuries he sustained were irrecoverable and Stephanie was faced with making the most excruciating decision in her life.   After 1 week in the trauma center at Fairfax Inova on Friday, October 11th, Stephanie would kiss her husband one very last time and say goodbye to her “always & forever”, the love of her life.  This day was the beginning of a journey like no other, one that neither Stephanie nor their families and friends could never have ever imagined.   It was one that would change the course of her life in so many ways.

As a registered organ and tissue donor, Martin would save three lives the night he passed with his healthy and strong liver and kidneys. As one of his very good friends stated the night he passed – “he left this world as he lived, in an act of ultimate generosity that is giving the gift of life to many others.” In the year to follow, Stephanie would learn that his heart tissue had saved three additional lives which included two 3-day old baby girls with heart defects.   While the pain of losing Martin was still unbearable, Stephanie found hope and peace in knowing that his legacy continued.

In January of 2014, after being approached by a friend and former colleague/business partner of Martins, Jack Reutemann from Research Financial Strategies, about hosting a golf tournament in his honor, Stephanie decided to take it a bit further.  She established a non-profit – The Annual Martin Klaiber Memorial Golf Tournament, now officially “The Klaiber Foundation”.  An organization established with a mission to give back to the local community organizations who are committed to saving lives every day, drive awareness about the importance of organ and tissue donation and help save the lives of countless animals.  All of this – one drive, one putt at a time. The three organizations include the The Loudoun First Responders Foundation (LFRF), The Washington Regional Transplant Community (WRTC), and last but not least, Tails of Hope in Mt. Airy, MD.

Martin was a man with an undeniable passion for the game of golf, always working on perfecting his game.  With the signature hole number 15 memorialized in his honor, the annual charity event held at River Creek, on a course he strived to master, continues year after year.